The hills and mountains of New Zealand have a profound effect on the country's weather. For example, when rain-bearing winds blow from sea to land, the upward motion of the air over the hills can cause 10 times as much rain to fall on high ground as at the coast.

Once the air has passed the crest of the ranges, it descends and warms, evaporating most of the water in the clouds and creating a rain shadow in the lee of the hills.

Because the prevailing wind in New Zealand is from the west -- nearly perpendicular to the main ranges -- conditions are relatively dry in eastern areas, from Gisborne to Otago, while western areas are wet enough to sustain rainforest.

But this is not the only way in which wind and mountains combine to produce rain. Often, instead of rising over the land, the air splits into two streams that flow on either side of the ranges, then wrap around the end and collide with each other. (Ocean waves do much the same thing, rushing up a beach then washing round a rock, the two streams joining up again behind it.) 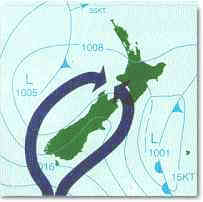 Where the two air streams converge, some of the air is forced upwards, creating a line of cumulus clouds. These produce rain if the middle atmosphere is cold enough to allow the clouds to grow tall. Such an event took place: on August 20, 1997. A southerly air stream was split in two by the Southern Alps. One stream spread up the east coast of the South Island, burst through Cook Strait and headed towards Taranaki. The other flowed up past Westland and Buller (as shown in the diagram to the right).

Where the streams converged, over the Tasman Sea just west of Taranaki, a line of tall cumulus and cumulonimbus clouds formed. These can be seen lying northeast to southwest on the 11am satellite picture (below). Cloud-top temperature was minus 42C, indicating a cloud-top height of around 7500 metres and the likelihood of thunderstorms.

After 11am, the line of cloud pivoted about its midpoint. The eastern section moved south-east over the central North Island, dropping 24.8mm of rain on New Plymouth airport between 4pm and midnight, and delivering 31 lightning strikes in the vicinity between 4pm and 7pm. Once the cumulonimbus had passed the high ground between Mt Taranaki and Mt Ruapehu, the clouds began to weaken as the air descended, and had mostly dissipated by 3am the following day. 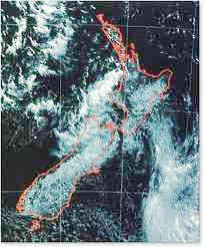 The western portion of the cloud line, meanwhile, moved northwards, retaining its cold tops and probably its vigorous thunderstorm activity for more than 24 hours. It finally weakened around 6pm the following day, when it lay just west of the northern tip of the North Island.

Convergence of low-level air plays a major role in the formation of cold and warm fronts. However, in a front the two convergent air masses have different characteristics -- one warm, moist and less dense, the other cold, dry and more dense. By comparison, the sort of convergence described above brings together two air masses of similar origin and characteristics. Such zones tend to be shorter-lived than fronts and usually produce much less rain. Sometimes, however. the rainfall is phenomenal, particularly if the zone is moving slowly over a favourable location.

Such a downpour occurred on December 20, 1976, in a convergence zone that ran along the hills west of Wellington and extended up the Hutt Valley. More than 300 mm of rain fell in 24 hours over much of this area -- the kind of deluge expected, on average, only once in 100 years or more. Much of the rain actually fell in less than 12 hours, making it more like a once-in-700-years event.

Flash floods metres high roared down steep gullies where ankle-deep creeks normally ran to the harbour. Miraculously, no one was killed by these torrents, although the Hutt motorway was severed and hundreds of workers had to be rescued by helicopter from the roof of a factory cut off by fast-moving flood water from the Korokoro Stream. Many vehicles were destroyed, some crushed almost beyond recognition.

The rain caused numerous landslips. A three-year-old boy lost his life when the side of a hall in Crofton Downs collapsed under the weight of a wall of rocks and earth sliding down a hillside, while in Stokes Valley a number of houses were crushed or driven from their foundations by slips. A state of emergency was declared in the Hutt Valley, with many people having to be evacuated from their homes. Damage was estimated at $30 million.

The narrow convergence line that caused the flood formed in a trough of low pressure over central New Zealand. A light southerly wind was blowing up the Kaikoura coast while a light northerly was blowing down the Kapiti coast. These two low-level winds converged over the Hutt Valley and the hills west of Wellington.

The air in the trough was unstable, causing deep cumulonimbus clouds to develop, and heavy rain commenced. The upward flow inside the clouds was so strong it sustained and reinforced the low-level inflow, thereby setting up a feedback mechanism between the clouds and the convergence zone, which maintained and intensified each other.

Furthermore, the way in which the heaviest rain followed the line of the hills suggests the cumulonimbus became anchored over the hilltops for a time -- probably because the surface northerlies on one side of the range and the southerlies on the other were deflected upwards by the rising ground, focusing the upward flow near the ridge line.

Eventually, the trough over Wellington moved slowly to the east, allowing the southerly winds to prevail. The convergence line broke up, the cumulonimbus began to dissipate and the heavy rain eased off.

Forecasting the location and intensity of convergence zones is difficult, especially more than 24 hours in advance. In most cases, computers now do a good job of tracking highs, lows and fronts several days into the future, but convergence zones usually slip between their electronic fingers. One reason is that such zones are generally smaller and of shorter duration than features such as fronts. Another reason is that they often owe their existence to subtle interactions between wind and land, so a computer needs a good description of an area's topography tucked away in its programs. This is something the global models that forecast the state of the atmosphere around the globe a week in advance do not have -- they rely instead on a relatively coarse interpretation of the landmasses.

One solution to this problem is to use a second computer model, covering only a fraction of the earth's surface, but in more detail, while using the predictions of the global model as a starting point. The National Institute of Water and Atmospheric Research (NIWA) is experimenting with such a "mesoscale" model, which is being run over an area of several thousand kilometres' radius centred on Cook Strait, with data points about 40km apart. This is about half the spacing of the global models, and therefore requires about eight times as many computations per square kilometre.

The mesoscale model also has a more sophisticated physics package than that of the global model, being better able to keep track of heat variations as water changes from gas to liquid to solid and back again. Among the advances this model should lead to is an improvement in the forecasting of snow levels. When a snowflake reaches air with a temperature above zero, it absorbs heat from the air and melts. This lowers the air temperature, allowing the next flake to descend further before it encounters air above zero temperature. The net result can be a lowering of the freezing level by as much as 700 metres more than that which the global models predict.

MetService forecasters are working with the NIWA researchers to gauge how accurate the predictions of the mesoscale model are. In particular, in severe weather conditions of heavy rain and damaging wind, they will assess what advantage there is in running the model with only 20km between data points, or applying the model over a larger area -- both of which require a lot more computer time.

Recent radar studies over North Carolina have detected convergence zones initiating and controlling most so-called random thunderstorms. Some of these zones are formed by interaction between wind and land, others by the leading edge of a sea breeze pushing in from the coast -- a frequent occurrence in New Zealand, especially when two sea breezes from opposite coasts converge, as they can do over Auckland and Northland.

Forecasting the precise location of thunderstorms is still beyond the capabilities of current models. Predicting the site of convergence zones caused by the interaction of wind and land, however, should be possible using the mesoscale model, if not with 40km between data points, then at 20 km resolution.

As each new advance in computer technology increases our number-crunching capability, it will be fascinating to see what further secrets we fathom in the mysteries of the weather.