When we see a large anticyclone on a weather map, most of us think of sunny days and light winds. In fact, anticyclones often have a full hat of tricks, including overcast skies, drizzle, thunderstorms, flash floods and even gales. 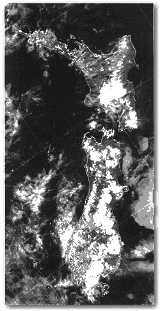 Satellite photo taken at 4.30pm, February 17, 1990. The circular white patches of bright cloud are the tops of thunderstorms.

Thunderstorms are a risk in anticyclones during the summer half of the year. A spectacular instance occurred on February 17, 1990, when thunderstorms developed in an almost continuous line from Invercargill to Ruapehu. Flash floods and slips cut a number of high country roads in South Canterbury, where rainfalls of 28 millimetres in one hour were recorded. In the North Island, a slip blocked State Highway 1 near Hunterville.

These thunderstorms formed in the afternoon over inland areas where the surface temperatures were highest, such as hillsides that were perpendicular to the incoming sunlight, and were stony rather than tree-covered.

The thunderstorms also tended to form along the inner limit of the sea breeze penetrating inland from the coast. Air from over the ocean has abundant water vapour. Once this air is entrained into the strong updraughts inside a thunderstorm cloud, most of the water vapour condenses to liquid. As it does so, heat is released, which increases the buoyancy of the air and maintains or even accelerates its upward motion.

(A good supply of water vapour is essential for the existence of the thunderstorms; water vapour can be thought of as the fuel that drives their growth.)

In this scenario, the air at the Earth's surface needed to be heated so much because anticyclones typically have a layer of warm air about 1500 metres above sea level. Normally in the atmosphere, temperature decreases with height, but at the base of the anticyclonic warm layer it increases abruptly by a few degrees over a short distance. This is known as a "temperature inversion," and it acts like a lid, preventing the air below from rising. Only when surface air has been heated to a temperature considerably warmer than the air in the inversion would it have sufficient buoyancy to punch through to the cooler air above.

How does an anticyclone create an inversion? Anticyclones are regions of higher atmospheric pressure -- "highs." They are caused by strong air currents in the upper atmosphere that pile up more air in one place than another.

The air inside the anticyclone is sinking from high levels. As it descends it is compressed by the greater atmospheric pressure near the Earth's surface, and this compression warms the air.

However, the sinking air does not normally reach all the way to the Earth's surface. Instead, it spreads out horizontally about 1500 metres above sea level, leaving a layer of colder air trapped between the inversion and the surface. Water vapour and atmospheric pollutants are trapped in this cold air, often creating a layer of cloud just below the inversion.

This is especially so in coastal areas when there is a wind blowing from sea to land. In Christchurch, a winter north-easterly can bring two or three days of low cloud and drizzle when an anticyclone is moving slowly over the city. Paradoxically, the clearance usually comes when the weather map looks more threatening, with a front approaching from the west and many isobars spreading over the country. This is because the wind changes direction as the front approaches, and blows across the Southern Alps. The air drops its rain on the West Coast; then, as it descends from the mountain tops, it is compressed and warmed. Because of the wind's strength and turbulence, the air now penetrates all the way to the Earth's surface, clearing the drizzle and low cloud.

Often the frontal rain does not reach Christchurch because of sheltering by the Alps, and if the wind direction behind the front is between west and southwest, Christchurch will still be sheltered from the post-frontal showers. So in these situations, Cantabrians have their most unpleasant weather during the anticyclone, and, their best weather when the front is near.

The anticyclonic temperature inversion not only acts like a lid on the low cloud, it also traps and distorts the surface winds. Because the inversion prevents surface air from rising, this air must go around obstacles.

Blocked by the Southern Alps, a west or north-west airstream is deflected around the ends of the South Island, causing gales in southern Fiordland and Cook Strait when the weather map has only a few isobars.

These strong winds, created at the junction of the land and the temperature inversion, can carry on downstream for hundreds of kilometres over the sea, but over rough terrain will dissipate in turbulent flow. Because they can occur when there are only one or two isobars over New Zealand, they often catch people unawares.

Aside from low cloud and drizzle, another characteristic of anticyclones in winter is fog. In the high country, the fog may be at temperatures below zero and cover the countryside in ice, causing sheep to freeze to the ground and rabbits to get frost-bitten ears.

Anticyclones are responsible for much of our fine weather, but the longer they are nearby, the greater the risk that something may go wrong. The moral is, never turn your back on an anticyclone, even one with a fine track record.